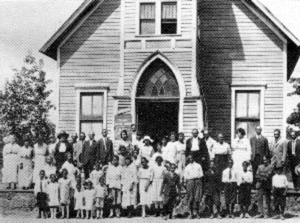 When African American celebrities make large gifts, news outlets often portray their contributions as a phenomenon and rare occurrence; still, many African Americans, are aware of our generosity to others — especially from a vantage point of a pew on Sunday mornings or at fraternal and sorority organizational meetings.

Some African Americans may equate philanthropic giving only to celebrities’ or professional athletes; nevertheless, there are many examples of African Americans from very humble backgrounds, who have become known for their philanthropic giving. Osceola McCarthy is one. Osceola McCarty, who described her occupation as a washerwoman and lived in Hattiesburg, Mississippi, donated $150,000 to University of Southern Mississippi (USM). The Oseola McCarty Scholarship Fund will provide scholarships for black students, who attend USM.

Osceola McCarthy’s story is so poignant and has significance for us all. Osceola McCarty, who spent over 75 years washing clothes, was able to amass a small fortune and make a contribution that would benefit generations to come. Personally, this story has significance for me: 1. I am an African American, who graduated from USM with a degree in Journalism and an emphasis in Public Relations; and 2. Since I paid for my undergraduate education through Student Educational Opportunity Grants, work-study assignments, part-time jobs at local restaurants, and Social Security and Dependent of Veteran benefits, I identified with the need for scholarships funds specifically for black students at a majority university, such as USM.

A History Replete with Stories of Giving

Support Community Partners’ effort to document historical philanthropic stories and photographs of our ancestors in Celebrating Philanthropy in Communities of African American Descent.

Black Philanthropy Month (BPM) observed in August as a global celebration and coordinated campaign that increases African-descent giving. BPM was created by Dr. Jackie Bouvier Copeland and Pan-African Women’s Philanthropy Network (PAWPNet), and launched in 2011 for commemoration of United Nations Year and Decade of People of African Descent.

“Primary aims of BPM are informing, involving, inspiring and investing in Black philanthropic leadership to strengthen African-American and African-descent giving in all its forms, for the benefit of our planet, our communities, our organizations and our lives.“

*Participate in an online philanthropy or community-focused related event

*Write an op-ed piece for a local or national publication, inspired by the theme and focused on philanthropy, community issues and African-descent people

*Request a proclamation from one or more of your governmental bodies, recognizing August as Black Philanthropy Month

To make a one-time gift or to become a member of Community Partners Giving Circle, please click on the following link or visit:  Become an African American Philanthropist webpage.

Community Care: What Do We Do Now?

The last year, 2021, has been one for the record books. The pandemic, racial injustice, and the state of the economy have been at the forefront of everyone’s minds. But there is something in the air that we have not seen in a while — hope. More people have...

END_OF_DOCUMENT_TOKEN_TO_BE_REPLACED

I am honored and humbled to be elected as President of Community Partners’ Board of Directors. I challenge my colleagues to become involved in nonprofit sector whether as a board member, mentor or in any way that you are able to provide your time, talent or treasures. Like so...

END_OF_DOCUMENT_TOKEN_TO_BE_REPLACED

Who Has a Seat at the Table When Funding Decisions Are Made?

END_OF_DOCUMENT_TOKEN_TO_BE_REPLACED

Be the first to learn about our latest trends and get exclusive offers.